Over a decade ago, when I first began my foray into the enigmatic and often entropic world of paranormal research, I found myself in the unfortunate (but common) situation of being reliant on the knowledge of those who came before me.  During this time I recall hearing a lot of mixed messages from various groups and investigators about the proper way to conduct a paranormal investigation. A few of those messages turned out to be good advice, some were highly questionable and others (most) were just outright outrageous. But like many inquisitive people who start out in this research, I would ultimately have to learn the truth (or at least a portion of it) for myself.

I too was once excited by photo orbs, enthralled by the pareidolic effects of white noise and easily taken in by every creak, bang and footstep I would hear in the darkened rooms of numerous “haunted” locations. I once believed that “ghosts” were intelligent, energy hungry electro-magnetic beings that could be discovered with the proper application of time, cameras and a good EMF meter. Yea I was in the dark alright (in more ways than one).

However, For me, what I have learned in the past ten years is not so much about what has been “discovered” through field investigation but more so about what has been “revealed” through proper research. I have found that much of the information that is often professed by multiple researchers as standardized knowledge is typically based on speculation, misinformation or basic belief.  A great example of this can be seen with the application technology in research.

For example, devices such as EMF meters have been historically touted for their usefulness in detecting “spirit presence” through the identification of anomalous electro-magnetic activity. However, aside from the obvious logistical holes in that concept, a little research will reveal that the meter itself is riddled with limitations that render it a very poor choice for scientific exploration. The non-frequency specific design presents an inherent inability to properly identify a true signal source leaving researchers to speculate or falsely identify anomalous phenomena as the cause of the unusual readings (and that’s just not good science).

Additionally the concept of measuring EMF to identify or locate anomalous beings or activity is scientifically unfounded. To date there has been no significant published research to support the concept that fluctuating electromagnetic signals are indicators of an undiscovered phenomena, let alone a dis-incarnate being (which is in itself unproven). However, there is supporting research to suggest that these electro-magnetic fields may play another role in the “haunting” experience.

The modern practice of measuring EMF signals in “haunted” environments became highly popularized following research conducted by Dr. Michael Persinger at Canada’s Laurentian College during the early 1980’s. Persinger’s research demonstrated that electro-magnetic fields could be responsible for perceived paranormal phenomena (Persinger 2001) and so paranormal researchers began measuring the intensity of these fields on location for the purpose of identifying natural causes to unusual claims. (i.e. if the fields are excessive in a home perhaps they are causing induced delusions)

While the specific signals that Persinger used to induce these delusions were never officially identified as the source of paranormal experiences in a home environment,  the purpose of searching for fluctuating EMF signals got lost to history and eventually researchers simply began to associate high EMF readings with paranormal experiences.

The adoption, misrepresentation, misuse and failure of electronics devices in paranormal research certainly doesn’t begin and end with EMF meters. Over the past 50 years alone researches have attempted to employ a large variety of pre-made, non-paranormal devices for paranormal research purposes. Gadgets such as thermometers,  polygraph machines, cameras Barometers,   multi-meters,  baby monitors, radio receivers, televisions, telephones,  tape recorders, computers, oscilloscopes, motion detectors and even flashlights were (and are) used by groups proclaiming a scientific methodology  to find evidence of a ghostly presence, all with the same level of applied conjecture and anticlimactic results.

But what about original equipment? When I first started out in this area of study the popular research community consensus was that  “no equipment exists that was specifically designed for the purpose of paranormal research”. In fact I heard this statement many times at several conventions I visited in 2007. Of course a little research shed some much needed light on the subject and, not surprisingly the information was simply not true.

The fact is many people through-out the 20th century had created equipment with a specific paranormal purpose in mind. In the early 1920’s the American Psychic Institute claimed to have over one hundred specialized scientific instruments many of which were purported to measure the intangible “soul force” or “psychic energy.”

Here are just a few of the mystifying devices: 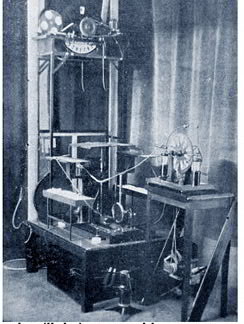 The “psychic ululometer (or howler)” –  A highly sensitive coil of 3000 finely tuned copper wires that were intended to reveal the presence of any energy, living or disembodied that comes within six feet of the coil. (Appleton [WI] Post-Crescent 28 March 1922: p. 4 – http://www.newspapers.com/newspage/76243876/)

The “dynamistograph” – A device created to measure departed personalities and communicate with the spirit world. (The Walther League Messenger, Vol. 38, 1929. http://www.encyclopedia.com/doc/1G2-3403801485.html)

The “lastrometer” – An apparatus containing a zinc sulfide screen, which glows when a person approaches. The glow varies according to the psychic energy of the person, and it is reasoned that a spirit or dis-incarnate being might reveal its presence through this glow. (Pittsburgh [PA] Press 23 April 1922 http://www.newspapers.com/newspage/76243876/)

Of course while none of these devices were ever successful in officially registering the presence of the dead, those seeking contact through this type of technology (a method known as Instrumental Trans-Communication –  ITC) were certainly not discouraged by the accumulated failures. In fact every generation has had its brand of “inventors” hoping to break the universal code and unlock the door to the other side. Many, though misguided, are sincere in their efforts while others are simply in search of  fame, fortune or both.

With advances in semi-conductor technology and lower component costs, one might expect the twenty first century to play host to the most progressive attempts at spirit communication technology to date. However reality paints quite a different picture.  A good portion of the modern technology used for anomalous investigation relies heavily on an age old form of spirit communication known as divining (i.e. to perceive by intuition or insight). Much like the Ouija Board, rune stones, tarot cards and pendulums the results produced by these devices manifest large amounts of conjecture and present pathways for numerous cognitive biases and misconceptions that can impair the users ability to process information objectively.

Ghost in the Box

Leading the way in modern divining technology is a highly controversial device known as a Spirit Box (also known as Frank’s Box, Ghost Box or Shack Hack). The basic principle behind this device is to automatically scan radio frequencies within the AM and FM band. This is done with the hope that ethereal beings will communicate messages over the barrage of scanned signals.

As fascinating as it may sound there are some fundamental issues concerning the logic behind the spirit box functionality and these concerns lie within the principles of radio broadcast and the design of the radio itself. I will explain…

The frequencies that make up music and human speech are simply not powerful enough to travel great distances on their own and the amplification of these low frequencies would require tremendous power at a great expense, two things that are not very appealing to the broadcast industry. Additionally, broadcasting primary frequencies this way would also allow for unwanted interference from other radio like devices and that means unhappy listeners.

To overcome these obstacles radio broadcasters developed a method of packaging the signal with a much higher and more easily transmitted frequency to broadcast their messages.  To accomplish this they simply combine the voice or music signal they want to send (called an input signal) with a much higher frequency (called a carrier signal).  This process is called modulation and the result is an easily transmitted hybrid of the two signals (see image below).

The new modulated signal is then broadcast through the air and picked up by a radio receiver (i.e. a spirit box). Once it is received, the higher carrier frequency is then filtered out and we are left with only the original voice or music we were intended to hear. The process of removing the carrier frequency is called “demodulation” and because the radio or spirit box demodulates every signal it receives,  stray radio waves are not heard.  That includes the purported ghost of aunt Sally or even Robin Williams.

For stray radio waves to be heard on a radio (spirit box or otherwise) they would need to be part of a modulated signal carried by man-made frequencies that were chosen specifically by the International Telecommunications Union (ITU). Because the Spirit Box scans a new frequency every second  or so (depending upon the settings) the communication by a dis-incarnate being would need to change the modulating frequency for every portion of the ghostly statement it’s trying to convey. A feat that would not only need to coincide with the frequency limits of the AM or FM radio band but also with the scanning speed of the Spirit Box (as set by the user). An exceedingly unlikely scenario.

While all of this seems pretty damning in terms of logistical support for such a device, proponents of the Spirit Box argue that the vast unknowns about the spirit world may place these exceedingly unlikely scenarios (and many others) within a realm of possibility. Supporters also contend that it’s not uncommon to receive intelligible, relevant communication when the using a spirit box and argue that traditional logic may not apply when researching such an unknown subject.

Still, in spite of the unrelenting support of believers, no reliable research has ever been presented (controversial or otherwise) to support the idea that a spirit box can foster communication with any world beyond our own. According to research conducted by Dr. Lynne Nygaard, professor of psychology at Emory University, the concept of extracting what appears to be intelligent communication from random speech segments (such as those produced by a spirit box) is not uncommon. In fact the experience can be attributed a cognitive function of our brain that processes speech information from the top level down (Nygaard 2005).

In other words, our brain first works to listen for the sounds of words as a whole without paying specific attention to the vowels, consonants or syllables that may be missing. When the fragmented speech contains enough frequencies to closely resemble a word (or words) we then anticipate any missing segments using a variety of biases to adapt the communication to the context of the current conversation or environment. Essentially, what this all means is that the identification of non contextual speech is based largely on anticipation and personal cognitive biases (belief).

It’s no surprise that the approach to such a broad, widely intangible subject requires the incumbency of an open mind. After all, history has demonstrated time and time again that limited thinking or the resistance of new ideas plays poorly with the concept of discovery. But it seems that far too often researchers find themselves misguided by the practice of nonrestrictive thinking so much so that they tend to often ignore the apparent boundaries of the very tangible, logical, real world elements that can present a viable practical answer to most questions.

Sometimes the most enlightening discoveries are the ones that prove us wrong.